The Mayor and Council oppose Montgomery County’s plans to house a future Department of Corrections and Rehabilitation Criminal Justice Complex and restoration center, and plans for a Montgomery County Public Schools/Ride On bus depot, on a 25.8-acre detention facility site on Seven Locks Road.

“[W]e remain vigorously opposed to the placement of the Restoration Center as currently proposed adjacent to any neighborhood, in this case, the County’s property at Seven Locks Road abutting and adjacent to 8 Rockville neighborhoods,” an Aug. 9 letter from the Mayor and Council to the Montgomery County Council and Executive Marc Elrich states.

“Residents in the neighborhoods close to the County’s property have become alerted to these proposed uses, and they have continually expressed strong opposition due to their numerous concerns about the negative impact on public safety, noise and air pollution, and traffic congestion.”

The demolition would allow space to relocate an MCPS bus depot from 16651 Crabbs Branch Way in Derwood. It would also allow for other uses, such as the restoration center, which would provide crisis stabilization and service referrals for people experiencing a behavioral health crisis.

While acknowledging the need to relocate the bus depot, the Mayor and Council “oppose the proposed Seven Locks Road location which would place approximately 270 school buses and about 50 Ride‐On buses immediately adjacent to 8 neighborhoods.”

According to the county’s Fiscal Year 2023 capital budget, the preliminary plans include demolition of several structures and “planning, design, and renovation/modification” of the site at 1307 Seven Locks Road, which was built in 1961. 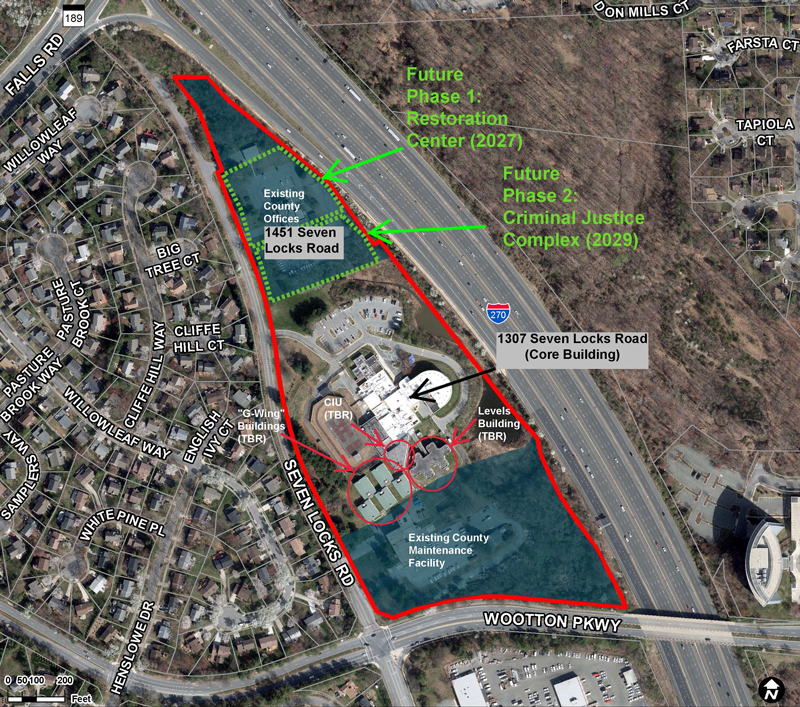